"The Whipfist is a thin, flexible, blade-edged arm that can be used to attack at extreme range, or whip through entire crowds of enemies. Tame your foes from a safe distance."
―Description[src]

The Whipfist is one of many abilities the Prototypes have at their disposal. It consists of an extendable, elongated, barbed appendage with a spear-like blade at the end. Given its unique status as a ranged attack, the Whipfist is usually the weapon of choice when opposed by the recurring Helicopters or distant enemies.

"Dismember all nearby enemies with a wide sweeping crack of Whipfist."
―Description.[src] 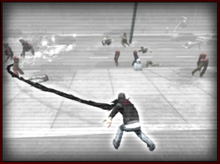 The street sweeper ability helps in dismembering multiple foes surrounding a Prototype with an eccentric 360-degree swath. This ability is highly effective against infected citizens, Walkers and military personnel. Larger enemies can also sustain multiple hits of the Whipfist if they are within an arm's reach. Charging this attack to its maximum will increase the sweep radius and damage. This upgrade is immediately available to Mercer once he acquires the Whipfist, while Heller automatically has this ability as his basic attack.

"If there is an enemy at long range, use Longshot Grab to reel them in. Combine it with skyjacking and zip your way up to a Helicopter."
―Description.[src] 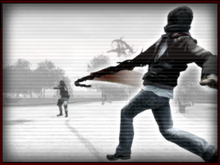 The Longshot grab ability is used to apprehend a distant enemy due to its extensive range. Larger foes will not be reeled in towards the Prototype, rather the Prototype will pull himself towards the target. This ability can also be used to skyjack Helicopters easily or "fish out" a specific target for consumption. It also has the benefit of being able to be executed while airborne.

The Whipfist is the longest range ground attack apart from the firearms. However, it does not inflict high damage against toughened enemies unless attacked multiple times. Whipfist can be used effectively against human-class targets such as the infected civilians, evolved infected, or normal military personnel. The Whipfist can also be used to destroy UAVs easily beyond their detection radius as well as the Viral Detectors and Sentry Guns. Charging any Whipfist ability in general will extend its effective range in addition to increased damage.

This power is useful when dealing with multiple weak enemies (humans, infected humans, etc.) in large groups. It might also be considered an anti-infantry ability.

Heller's Whipfist attacks in Prototype 2 are more streamlined and efficient than Mercer's in Prototype. Heller's basic attack combo mixes in Street Sweeper and original moves, which can also be executed while in mid-air.

James Heller with the whipfist ability.

Heller's whipfist launching at a Helicopter

In game Icon from Prototype

In game Icon from Prototype 2