Wall Running is one of the advanced movement abilities that the Prototypes are capable of performing, due to their evolved leg musculature.

In order to wall run, Alex and Heller shift their biomass to their limbs to grant them greatly augmented strength, speed, and agility, an effect giving them the ability to run along nearly any surface. Their speed and agility increased greatly while their movement abilities evolved. They were also capable of using their biomass-enhanced strength to perform a much slower, more controlled wall climb, which is useful for precision, accuracy and stealth when scaling buildings. 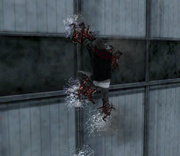