"Gonna have to be careful around these things..."
―Alex talking about the Viral detectors.[src] 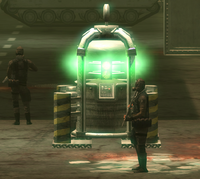 Viral detectors were built by Blackwatch to track down Mercer after his escape from Gentek. These detectors are usually installed around Military bases. Whenever there is a trace of Mercer's strain of the Blacklight virus, the detectors would flash yellow. As the game progress, they become more dense, cover larger areas, sound an alert faster, and become harder to sabotage.

At close proximity to the virus, the detectors flash red and alert the Marines or Blackwatch soldiers stationed around. These detectors can also call in Strike teams during an alert.

Viral Detectors can be sabotaged by entering a series of codes. While they are sabotaged, they can no longer detect the virus' presence. They can also be destroyed from a distance by throwing objects or by using firearms, although this will cause alert. Sabotaged or destroyed viral detectors will return functional after entering and exiting the building.

In Prototype 2, viral detectors also appear in the military bases. Compared to the first game, the alerting build up rate has decreased, allowing Heller to stay within detecting range for longer, especially with the right upgrade.

They also have a shorter range, appear less often with only one or two in most bases, and locations are poorly assigned which makes them poor protection. Most bases' entrances, Blacknet terminals, reserved vehicles, as well as officers' or commanders' stationing or patrolling area, are out of their detection range.

Viral detectors in Prototype 2 cannot be sabotaged, however, unlike the first game, attacking them out of other military units' sight will not cause an alert. Using a stealth Biobomb on someone who is next to them will also effectively neutralize them. They also cannot call in a strike package. 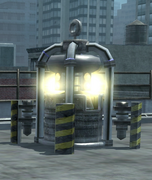 The detector scanning for the virus.