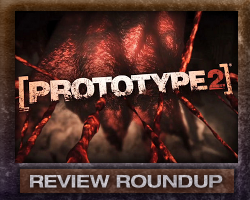 Prototype 2 is finally here! After months of waiting, we can finally experience the game in full glory! But how good is the game, according to the critics? Check out our review round-up below for the answer to that question, and be sure to leave your opinion in the comments!

Overall, the critics were positive about the game. The game scored a Metacritic score of 78 (Generally favorable reviews ) and a GameRankings score of 81.23%.

Game Chronicles
Score: 9.7/10
With a brand new character, engaging story, enhanced powers, and integrated gameplay features like Hunting and Mutations, Prototype 2 is a visionary nightmare that's a dream to play.

Planet Xbox 360
Score: 9/10
With a new lead and a story that actually clicks better than expected, it's a wonderful sequel that surpasses the original. Though some aspects can be questioned, the game as a whole gives you a bunch to do, online and off, and some incredible means to get it done.

GameInformer
Score: 8.5/10
Prototype 2 has officially redeemed this franchise. The mechanics feel the way you wished they would have in the first installment, and it's a rush to abuse your incredible powers any way you see fit. If you've stayed away from the first game because of the lackluster word of mouth, don't hesitate to jump right into the sequel.

Guardian
Score: 8/10
The very purity of purpose which makes the game such a fine arcade killbox also renders it unengaging on any level that isn't soggy and littered with stray organs. So while as a destruction simulator Prototype 2 scores very highly, there's a chance that, just like those toddlers in the dirt, you'll get bored after a short while and wander away.

Official XBOX Magazine
Score: 8/10
Even when your objectives sound about as thrilling as a Sunday-afternoon grocery run, the sheer chaos Heller unleashes upon the distressed and detailed world of New York Zero while completing them keeps Prototype 2 from feeling like a chore. If you can turn off your brain and just enjoy the frenzied carnage, you'll have a blast.

GamesRadar
Score: 8/10
If you're looking for an epic, hugely varied adventure, look elsewhere, but if you want a game that lets you run amok in creative, bloody ways, Prototype 2 is pretty incredible.

Destructoid
Score: 8/10
Simply put, Prototype 2 is your number one choice for anybody who wants to inflict abject biological horror on an entire army of helpless individuals who are nonetheless just nefarious enough for you to feel justified.

Thought it was Okay

No sites gave Prototype 2 a mediocre score. If any mediocre scores (6 out of 10 or lower) appear, they'll be added to this section.

No sites panned Prototype 2. If any bad scores (4 out of 10 or lower) appear, they'll be added to this section.

Now it's time for Wikians to review Prototype 2. If you pick up a copy, post your thoughts in the comments or post your own blog! Let us know what you thought!