Unexpected Family is a mission in Prototype.

Alex Mercer stands on a rooftop along with an unknown man. Mercer tries to explain what he has become.

Day 18 of the infection.

Two scientists surround Mercer's corpse, while it lays on a table. One of them recognizes him as "Mercer, Alex, J." He also mentions next of kin as "Mercer, Dana, A." and wonders how they were related. They then proceed to start the autopsy on Mercer's body.

As they begin, Mercer wakes up, shocked to find himself in a morgue and unable to remember anything about himself. The two scientists leave the room scared and calling for a kill team. Alex gets up slowly and exits the building, following the scientists.

As he comes out, a few military soldiers are landing in the compound. The scientists that ran out of the morgue were trying to explain the situation to the soldiers, but instead of listening to them, the soldiers shot them and proceeded towards the building. Mercer tries to escape, but the soldiers notice him, and one of them orders the others to open fire. Even after being fired at, by five soldiers, Alex's body starts to regenerate. Furious and confused of what just happened, he tries to find a way out. Out of instinct, he runs towards a low wall, and is amazed when he's able to jump over the wall with relative ease.

His body still aching, Mercer moves at a slow pace but is confronted by an armed helicopter. He tries to outrun his pursuer and starts to sprint, discovering he is capable of outrunning other human beings and vehicles. Mercer manages to dodge the helicopter.

The helicopter, however, finds him within minutes. They open fire at Mercer, and end up hitting a passing taxi. Instinct takes over, and Mercer grabs the vehicle. After taking in the moment, he hurls it towards the helicopter. Knowing what he is capable of, Mercer tries to scale the nearest building. But upon reaching the rooftops, gunships start firing at him. He quickly dispatches the threat and makes his way down to the street below. 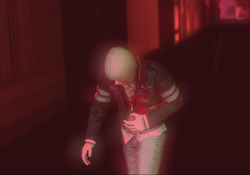 With the voices of the Gentek scientist still echoing in his mind, Mercer collapses in an alley. Few seconds later, a Blackwatch soldier stumbles upon him. He points his Assault rifle at Mercer and plants a bullet in his head. Considering him dead, the trooper reports to a commander about killing Mercer. Enraged at being shot, he wakes up and grabs the soldiers by the throat. Mercer then consumes the soldier. He senses someone approaching and transforms into the soldier he consumed moments ago.

The Blackwatch commander, presuming the disguised Mercer to be his sub-ordinate, orders him to report about the situation he mentioned over the radio. Mercer picks up the commander and consumes him as well, a memory from the commander appears. Mercer is able to see that the commander had recently confronted Dana Mercer. He realizes that she was his sister and runs to her rescue, hoping that she might be able to explain his past.

After crossing rooftops, he arrives at her apartment. Blackwatch soldiers were already stationed outside, "They seem to know that Mercer would contact her." Disguised as the commander he had consumed, Mercer walks past the soldiers unquestioned. As he enters Dana's apartment a soldier tries to grab Dana. Mercer punches the soldier, killing him.

Dana and Alex leave the building unnoticed by the soldiers. Dana enquires where Alex had been the past few days after he had asked her to investigate about Gentek. Unable to remember anything about this, he suggest they find a safe place away from the military.