"They've been trained to specifically counteract viral-targets. They are highly-mobile, super strong, resilient and capable of going toe-to-toe with even the strongest infected."
―Timothy Lamons describing a Super Soldier

Super Soldiers (also known as D-Code Soldiers) are soldiers who have been genetically enhanced by Gentek with the three week old DX-1120 strain of the Blacklight virus.

In 2008, nearly 161 individuals were injected with a variant of the virus, and exhibited no negative side effects at all, but over time, their cellular structure was capable of regenerating much faster than the average human's. In addition to accelerated healing, or perhaps because of it, they also gained incredible strength, speed and endurance, as well near-limitless stamina.

Their healing factor made them prime candidates for surgical enhancements, mostly in the form of bulletproof plating being molded to their soft muscle tissue, making them much more durable. They stand head and shoulders above the standard soldier, and have a much heavier build.

Their only form of equipment is standard webbing and an infection detection device that allows them to see anyone infected with the Blacklight virus, like other Hunters, to pick out Alex Mercer from crowds and see through disguises. Super Soldiers appear to be the most high-ranking officers in Blackwatch, as they wear the same uniforms as human officers and give orders to the lower ranking soldiers in the field. Instead of the tri-lens goggles worn by the standard officers, they wear what appear to be metal gas masks.

During the second outbreak, a new breed of Super Soldiers were developed under Project Orion. The project consisted of two stages: the first phase soldiers were similar to the D-Codes created during the first outbreak and during Phase Two, soldiers were created by combining the enhancing serum with James Heller's DNA, and DNA found in a Hydra. Gentek only succeeded in creating one soldier, but intended to clone him should the rest of the project be destroyed. The Phase Two soldier was even larger, bulkier, tougher and definitely stronger than the basic super soldier, possessing a series of cables running through his shoulders and arms which glowed in a manner similar to Heller's mutated arms. His strength, durability, endurance, speed and stamina far surpassed that of the standard Phase One soldier and his armor was able to deflect rockets. The Phase Two portion of Project Orion came to an end when this soldier was killed and consumed by James Heller, granting Heller the Biomass Explosion Devastator in the process.

Later in time, Gentek made a last-ditch effort to revive Phase Two in the Green Zone, by securing the last samples of Heller's DNA via helicopter. However, as Heller had been listening in through //BLACKNET, he discovered their plan and collected the samples before Gentek's forces could, thus severing any hope of reviving Phase Two of Project Orion.

In Prototype 2, Super Soldiers will often emit a blue glow (yellow in case of phase 2). At this state, they are completely invulnerable and are about to strike. However, they will sometimes punch or kick, which won't glow. These attacks inflict less damage and can be interrupted by attacking, but will catch the player off guard more easily. They can also grab Heller, which is required to be countered by the right key, if these grab attacks are not countered in time, they can deplete a large chunk of Heller's overall health.

The most effective powers against Super Soldiers are Claws and Blade; simply keep attacking with the Claws raw speed or use the Blade's tornado attack until they start to glow, then block immediately to perform a shield bash which can stun them.

Super Soldiers' attacks can be stopped by using the Shield when shield-bashed, which is achieved by blocking when they are about to strike, which will cause them to be stunned, allowing Heller to follow up a suplex (achieved by hitting the grab key). The suplex deals heavy damage, grants Heller brief invulnerability, and stuns nearby enemies during the move. Heller can then continue slashing or use a charged up attack.

Super Soldiers become most deadly when paired with other military units, as they take time to take down, while creating openings for other long range units such as rocket launcher operators or helicopters. However, as both are prone to shield block, dealing with them won't be a big problem once the player becomes familiar with this pattern. Experienced players with a shield up mutation can even block or deflect multiple attacks with a single block.

In-game, they are more like Infected on the Blackwatch's side, rather than human beings. They use their own fists for close range attacks and kicking sometimes, throw rocks for long range attacks, with surprising accuracy, and even offer a power or an ability upgrade when consumed just like Infected, although they lack the ability to detect Heller, or healing by consumption. 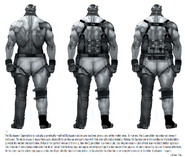 A Super Soldier fighting with a Hunter.

A Phase One Super Soldier fighting with Heller.

Heller using his Claws against a Super Soldier. 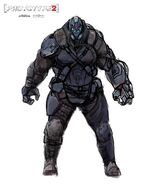