Strike Teams are fast-moving, powerful squads of soldiers, specifically designed to strike fast and hard. If any kind of military force is losing a battle with Alex Mercer, the leader of the force will radio Command and summon one of these teams for immediate help. In early stages, transport Helicopters will arrive, shoot at the player and attempt to drop off a squad of marines.

During the early stages of the quarantine, each Strike Team consists of one to two helicopters. As Blackwatch begin to secure the city, Strike Teams will consist of up to four Gunships and flying viral detectors. To end a Strike Team status, player must either switch form outside of military's view, or simply destroy all helicopters in the Strike Team. After that, the player will receive an EP bonus and the Strike Team will be disabled for a short time. 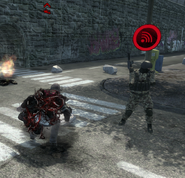 A Marine calling for a strike package.

Heller against a strike team.
Community content is available under CC-BY-SA unless otherwise noted.
Advertisement