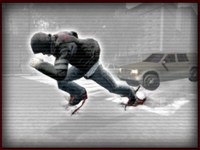 Sprint Upgrades are a variation of evolutions to the Prototypes' leg musculature. These upgrades allow them to sprint at high speeds, allowing them to regenerate in a heated battle or outrun their enemies.

Diveroll is an excellent defensive maneuver to avoid projectiles and attacks. It can be used to evade the swipe attacks by hunters and attack the foe after dodging its initial attack.

This ability is a great alternative from either jumping or airdashing away from the enemies. Since the attacks can be avoided, Mercer can stay close to the enemy and counter the attacks easily.

Sprint can be upgraded in three levels. Although these upgrades are tactically not important, they help to boost their jumps.

A core upgrade which increases the initial sprint speed and agility of Alex Mercer by boosting his joints and allowing his body to streamline.

Evolutionary upgrade to the sprint, this increases the speed further allowing Mercer to reach great speeds.

With the ability evolved to the highest level, Mercer can outrun any form of infected or military be able to avoid obstacles and enemy attacks more easily.