"The Shield will absorb damage on impact, preserving your Health completely—until it breaks. Once broken, the Shield must regenerate before it will once again repel damage."
―Description[src] 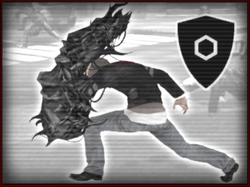 The Shield is one of the defensive powers developed by Alex Mercer and James Heller. Unlike the Armor, Shield completely nullifies damage instead of merely reducing it, though only against projectile attacks directed to the front.[1]

With James Heller's case, his Shields covers all around him.

When using the Shield Power, a large amount of biomass is shifted to the left arm, molding it into a nigh-impenetrable black-biomass shield. It is normally not seen while Alex is standing still, and only as a mass on his shoulder, but is clearly shown when he is sprinting, targeting, or other more active moves. Unlike the Armor, mobility is not hindered when the Shield is active.[1]

The Shield blocks all incoming frontal projectile fire, or all-round melee attacks, until its damage threshold is reached, at which point it will shatter and require time to regenerate before it can be deployed again. Alex will also incur some damage when his shield breaks from whatever cause. It regenerates and becomes available again automatically. [1]

Diverolls will still be accessible and Alex will not be slowed by its presence. When sprinting with the Shield active, it is be deployed in front of Alex as a battering ram to push away cars and human-sized enemies, killing the latter instantly in most cases. Although larger enemies, such as Hunters or armored vehicles, will not be affected. It can withstand rifle fire almost indefinitely and block a few grenades; however, a missile attack will shatter it instantly. It can stand up to a few hits from Hunters and D-Codes, though larger enemies will break it instantly. Strangely, using the Shield results in no damage taken from Bloodtox.[1]

James Heller uses both arms to generate his shields, which do not break, except for area attacks that bypass the Shield's indefinite blocking capability.

Attacks that can bypass Heller's Shield[]

Note that Military units have no way of breaking the shield block at all.

Since the Shield is a defensive power, Alex may use it in conjunction with an offensive power to attack his enemies while staying protected, as the Shield only comes into view in the case of running or being attacked. When hit by bullets, the Shield will deflect them randomly. In this manner, an entire squad of soldiers can be killed without any effort. Simply standing still will automatically manifest the shield and deflect their fire. Alex can use the Shield to eliminate groups of enemies like a battling ram.[1]

However, James Heller is capable of directing enemy projectiles against them. This includes missiles launched by strike teams or soldiers, which are able to be deflected by Heller towards a particular target. James Heller can manifest spiked shields on both arms after he evolves them. This has the benefit of causing damage to enemies in melee range when a blocking move is timed correctly, in addition to the basic effect of stunning them.[2]

Alex Mercer, unlike James Heller, can move with his Shield activated. 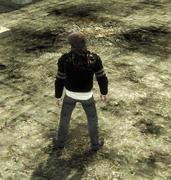 A Concept art for the Shield.