Blackwatch Trooper: "Sir... is it true he caught the last runner on his own?"
Randall: "Not caught. Killed."
―General Peter Randall answering Curtis Blum's question.[src]

Captain Robert Cross, also known as The Specialist, was a notorious and elite officer of Blackwatch. Resilient, resourceful, and deadly, the Specialist is sent in when things fail to go according to plan—Blackwatch’s insurance.

Robert Cross was a Lieutenant in the US Army. He was recruited into Blackwatch after he survived a mission into Springfield. Back in 1998, Cross and his team entered the underground city to search for any survivors. Soon Cross and his team found themselves overwhelmed by infected creatures. Cross managed to escape the city and found General Randall waiting for him outside. Upon inquiring, Randall said the mission was part of his initiation into Blackwatch.

As a Captain in Blackwatch, Cross hunted a Runner at some point. This unknown Runner had fled to Two Bluff, Arizona, and infected the entire town. When Cross was called in, he tracked the Runner and killed it.[1]

During the Manhattan outbreak, Cross was called in when most of the Blackwatch soldiers failed to capture Mercer. Cross led The Wisemen Team, who were tasked with finding and capturing Alex Mercer, codenamed Zeus. At one point during the mission, Cross was given the task of injecting Alex with a parasite that would neutralize Alex's abilities, and produce an anti-virus within his body.

Blackwatch set a trap to capture Mercer. Karen Parker, who was working with Blackwatch, was to direct Alex to an Infected Hive. Cross confronted him inside, but failed to contain him. Unwilling to give up, Cross manipulated Alex's weakness by reminding Alex of the incident at Penn Station, triggering a painful flashback. He was thrown off guard and Cross was able to inject him with the parasite.[1]

Cross eventually discovered General Randall's last resort, to use a nuclear weapon on Manhattan Island if the spread of the Virus could not be halted conventionally. Unlike most of his superiors and subordinates, Cross showed emotional regret for his actions and sympathy for the civilians.

After Alex recovered, Cross realized that he was the only person that could stop the nuclear annihilation of the island. He got in contact with Alex anonymously and helped him stop Blackwatch from taking absolute control of the city. Cross provided Alex with information which helped him get close to Raymond McMullen.[1]

Cross later revealed that Blackwatch planned to get Greene and her army of infected to the surface by pumping Bloodtox underground, as they had retreated beneath the city. Alex then followed Cross' instructions and was able kill Elizabeth Greene. The remaining infected were a much more manageable threat without Greene's guidance. However, the continuing spread of the infection had prompted General Randall to order the evacuation in preparation for a nuclear cleansing of the city. At some unknown point during the Blackwatch evacuation of the island, the Supreme Hunter killed and consumed Cross to assume his form, knowledge and abilities.

The Supreme Hunter, as Cross, realized that Alex was now hunting for General Randall, however he could not get to Randall since he had retreated to the Reagan, an aircraft carrier docked at the city's port. In order to foil Randall's plans to nuke the city, the Supreme Hunter contacted Alex in Cross' form. He suggested Alex find Col. Ian Taggart, who was responsible for the loss of Blackwatch's base of operations on the island, and was to be captured. Cross had been ordered to bring Taggart directly to Randall himself.[1]

Alex found and consumed Taggart before taking on Taggart's appearance and boarding the carrier as Cross' prisoner. Randall shot Mercer in the head, not knowing who he really was. As the General discussed his plans to cleanse the city, Alex regenerated and consumed him. Soon after Randall was killed, the Supreme Hunter revealed itself, discarding Cross' form. It revealed that, if it could consume Alex, it could withstand the nuclear blast. After a fierce battle on the Reagan's deck, Mercer defeated the Supreme Hunter by decapitating it. 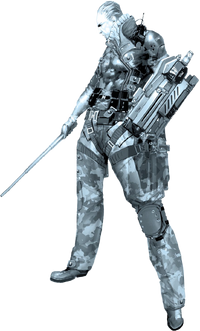 Cross' world is a world of absolutes; like mathematics, only one answer can be gained out of any equation. To him, the world was easy to understand. He believed Blackwatch was all that stood between the average American and a biological apocalypse. His knowledge of Blackwatch was highly edited by his superior, General Randall, to fit his world-view. Confronted with proof that Blackwatch was not what he believed it to be, he reoriented his allegiance immediately to stay in line with his beliefs. Shown absolute proof that his employers are on the wrong side of the moral divide, he will go after them with the same verve he showed as their lapdog.[1]

In game, Cross is show to be a highly intelligent individual, more than capable of holding his own in a fight with even the strongest infected. He is the only Blackwatch soldier to show remorse and guilt for his actions in the operation, as shown by his eventual betrayal of them in order to protect Manhattan.

Captain Cross retained similar equipment to the rest of his Blackwatch unit, though his uniform had been modified to distinguish him. He was further outfitted with a rappelling tool and harness, a stun baton and a custom fitted MK19 grenade launcher.

Cross was to some degree infected by the virus, this explains his unusual durability in the face of Mercer's onslaughts.[1] All of these strengths, however, were insufficient to aid him in his final moments as the Captain was killed and consumed by the Supreme Hunter.

Cross and Alex locked in combat in the Hive.

Cross with his stun baton activated.

Cross during his hunt for an unnamed Runner. 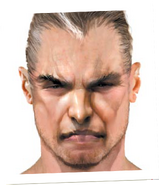 Cross, from his Prima guide biography

Cross, during the Blackwatch evacuation

Cross debriefed about introducing the cure into Mercer

Cross during evacuation of the Blackwatch base.
Concept Arts

Early concept art for The Specialist

Face concepts for The Specialist

Colonel Crawford, an early concept for The Specialist