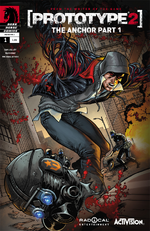 Prototype 2 is a comic series consisting of three books detailing the events that occurred between, Prototype and Prototype 2. The series was announced on January 17, 2012 as a collaboration between Dark Horse Comics and Radical Entertainment. [1]

The second book, "The Survivors", is illustrated by Chris Staggs and follows a small group of residents of New York trying to escape the city after it has been transformed into NYZ with the outbreak of the Blacklight virus. Victor Drujiniu has illustrated the last book, "The Labyrinth" provides a deeper backstory and acts as a prologue to the events of Prototype 2.

The books were released bi-weekly and were split into two parts.[3]

After stopping the nuclear threat, Mercer, having lost faith in humanity as a result of his own actions, went on a soul-searching trip around the world, hoping to find something to believe in. Unfortunately, throughout his travels, Mercer only found more and more reasons to hate humanity rather than protect it.

During his travels, Mercer killed a villainous African warlord and traveled to Moscow, where he came to realize that, even though humans treated one another with decency, it was all a façade and they only cared about themselves and their individual freedoms. On his way back to the U.S., Mercer freed a small town from a drug cartel, though the citizens' celebrations only further convinced Alex that humans were selfish and not worth saving.

Making his way to a lumber mill in the north, Mercer took on the alias of a writer named Jack and rented out a cabin from the mill owner Flint and his daughter Autumn, the latter of whom became attracted to him. However, Flint's former business partner, Zurich, wanted the lands around Flint's lumber mill, and when it became clear that Flint would not sell, Zurich sent two thugs to kill him and Autumn. However, Mercer killed the thugs and decided to deal with Zurich himself.

Realizing that he had developed feelings for Autumn, Mercer infiltrated Zurich's base and consumed him, discovering through his memories that Flint was once a criminal involved in many murders and extortions. Enraged and disappointed, Mercer returned to Flint's cabin and, despite Flint's insistence that he had left his past behind, killed him.

Still in disguise as Jack, Mercer returned to his cabin to find Autumn there and attempted to convince her to come with him, only to discover that Autumn had stolen his money. Autumn promptly shot Mercer in the face and revealed that her father had taught her better and that she cared about herself above anything else. To her surprise, however, Mercer regenerated and consumed her, finally deciding once and for all that humanity was worthless and that it was his duty to destroy them and usher in a new and better world.

Conrad, a former Police officer was one of the few survivors in the Red Zone. However, he came across Ami Levin, a young boy who believed that God was punishing them for their misdeeds and Marcie, an art student. Conrad did not dare approach Blackwatch as he had witnessed the fate of those who had surrendered.

Conrad took his chance to escape when Blackwatch was busy killing the infected. He led Marcie and Ami to a Blackwatch base hoping to commandeer one of the helicopters. The trio managed to get inside one of Blackwatch's helicopters by hiding themselves inside a cargo crate. Conrad tried to force the pilot to fly them out of New York, however, the fight between them resulted with a crash in the Yellow Zone. Eventually, Conrad came in contact with a group of resistance led by Athena in the Yellow Zone. The resistance revealed that the zone was an experimental field for Gentek and Blackwatch. Disregarding Athena's advice to stay hidden, Conrad attempts to infiltrate one of Blackwatch's Helipads in the vicinity.

He threatened one of the Gentek workers and commandeers his vehicle. Conrad and Marcie dressed themselves with the hazmat suits and pretend to escort Ami as their prisoner. Eventually they were brought to one of Gentek's facilities in the Green Zone and Conrad was confronted by Lt. Clint Riley. Conrad tried to justify the murders he had committed in the Red Zone. He explained that he wanted to get out of town to meet his wife along with Ami and Marcie and was forced to kill the soldiers since he had seen what Blackwatch was doing to any survivor of the Red Zone.

Riley agreed to let Conrad see his wife, if he would work for Blackwatch. In his desperation to be reunited with his wife, Conrad agreed to work for them. However, Madeline Stevens, Conrad's wife, had died after returning to the city early after visiting her family. Unbeknownst to him, Riley kept this information from Conrad. Marcie, Conrad, and Ami were now test subjects for an experiment designated, "Orion.

Heller is woken up by a man name called Saul Benjamin who introduces himself as a photographer. Heller enquires where they're were being held, however, Saul informed that the last thing he could remember was falling asleep while accompanying a light armored unit while Heller claimed that he was on patrol. Saul tried to detail the soldiers he had seen in the bunker and how the last two prisoners were tortured.

Soon, Saul was taken away by a few soldiers, while Heller was left alone. After sometime, the gates to his prison were opened and Heller moved out cautiously. He dismantled the lever to use it as a weapon, as he came across a few infected Walkers dressed in lab coats. Heller found a weapon cache and continued to find a way out of the bunker. On his way he came across two soldiers who were terribly injured.

Heller and the two soldiers make their way through the bunker. As Heller shoots through a few bars, they are attacked by a Spiked Brawler. The soldiers shout at Heller to retreat back into the prison, but Heller guns down the Brawler and continues towards the exit. The soldiers introduce themselves as Jones and Kaley and inform Heller that the bunker was run by scientists. They reveal that these scientists had got samples from the first Manhattan outbreak.

Eventually, they come across Santos, a scientist whom Jones claims was infected with the virus. Jones orders Heller to shoot him, but Heller hesitates as Santos was not displaying any signs of infection. Santos pleads to Heller not to kill him as he wasn't infected, while Jones and Kaley shout at Heller to shoot him. Heller decides not to shoot Santos as he was unarmed and uninfected. Upon hearing Heller's decision, Jones sedates him.

Heller wakes up back in the infirmary in Iraq, Captain Langford informs Heller that a sniper bullet had grazed him, while his associate Patterson had been killed. Langford assures Heller that he might experience memory loss due to the trauma and leaves Heller to speak to his family. Outside, Colonel Shawcross informs Langford that Heller's action back in the bunker had made it clear that he was not Blackwatch material. 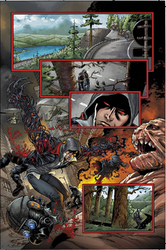 Paco Diaz's illustration of "The Anchor". 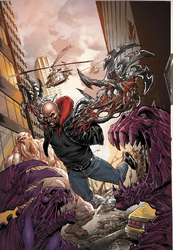 Add an image to this gallery

Retrieved from "https://prototype.fandom.com/wiki/Prototype_2_(comic)?oldid=35929"
Community content is available under CC-BY-SA unless otherwise noted.