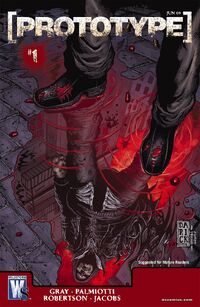 Prototype is a 2009 comic book made by DC Wildstorm that was released along with the game. It is written by Justin Gray and Jimmy Palmiotti, and with art by Darick Robertson and Matt Jacobs. It reveals more about Hope, Idaho, Elizabeth Greene, and the viral outbreak. There are 6 issues of the comic.

In 1969, 1st Lieutenant Peter Randall is serving in the Vietnam War. It is during the war that Randall shows a strong commitment to his duty and insurance in containing the "communist plague". While leading his squad in infiltrating a North Vietnamese military outpost, Randall is unexpectedly met by U.S. General Stillwell, who informs him that he is being reassigned. When a hesitant Randall asks what he should do with his men, Stillwell suddenly kills them and telling Randall that it was an order.

Subsequently, Randall participated in leading a Blackwatch unit in infiltrating Hope, Idaho and securing the "package" (the Redlight virus) before the town is obliterated. Upon arriving into a seemingly deserted Hope, Randall and his team are set upon and almost nearly being overwhelmed by the Infected. Randall and his remaining men managed to locate the package in a bunker underneath the town.

In 2008, NYPD Detectives McKlusky and Ella Garcia are summoned to the scene of multiple homicides on Manhattan's West Side. They arrive at a homeless commune in an abandoned subway where they are told to don hazard suits, and discover that the commune's residents were savagely slaughtered. They learned from a forensic scientist that the victims were killed by some kind of unrecognizable animal/creature, given the study of the severe wounds and a large bloody footprint trail that is found on a wall. 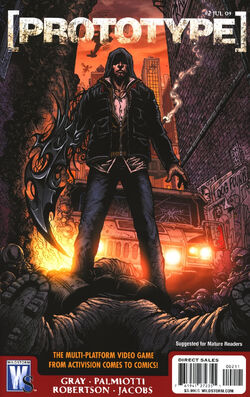 After successfully obtaining the package, Randall and his men fight through the Infected that were experimented by Blackwatch. Upon reaching the surface, they are found by another Blackwatch unit led by Sergeant Sam Hendrick, who informs them the bad news: the entire town is compromised and that they are to take a fortified position in a nearby hospital and await for their extraction.

In the present, McKlusky and Garcia study on the given information provided by the FBI on Alex Mercer following his recent attack on a military strike team. They examine Mercer's connection to Gentek, which McKlusky has some foremost knowledge on the private company and their practice of manipulating human genes, and bringing his suspicions that Mercer was working on a genetic weapons program for Gentek. The detectives are later called to a supposed terror attack. When asking a police sergeant as to what had occurred, he answers that, according to the dozens of eyewitnesses, they were attacked by monsters. At this moment, Blackwatch begins its operation in containing Manhattan and placing the city under martial law. Now General Randall observes the operation as he begins reminiscing his ordeal in Hope in which he was forced to amputate his left arm from his encounter with Elizabeth Greene, who is currently running loose in the city.

McKlusky and Garcia are caught in the middle of Blackwatch's intervention. They then drive to Soho where they meet McKlusky's associate and conspiracy theorist, Maxwell Robbins. Robins has a history with Blackwatch in which McKlusky and his partner came to him for answers. Robins explains that Blackwatch's presence was in response to the information which he had hacked into concerning something "biological and deadly" that is loose in the city and advise the detectives to leave the city as soon as possible. Then, without warning, Robins is then suddenly shot in the head by a sniper. 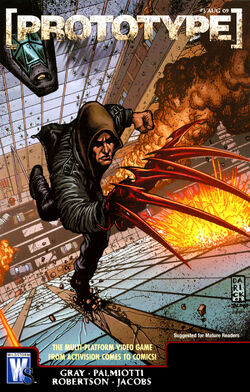 Following Robins' sudden death, McKlusky and Garcia leaves his apartment before being shortly held at gunpoint by a pair of National Guardsmen. The Guardsmen have no intention on leaving the detectives alive. But fortunately, the detectives quickly subdue the soldiers and start interrogating them. One of the Guardsmen states that they were given the order to kill anyone in an area designated as "Infected," and they do not care to question their orders given the chaos unfolding in Manhattan. The detectives then leave the Guardsmen with their weapons.

McKlusky and Garcia are later called and dispatched to 125th Street where it is the site of an Infected attack. There, the detectives investigate an abandoned building where the incident took place. Suddenly the roof breaks down and a Hunter appears before them. With their pistols having no effect on the creature, Garcia and McKlusky flee into a nearby room and jump out a window.

Peter Randall recalls the life of Elizabeth Greene. Elizabeth was born in 1951 and moved to Hope, Idaho with her father in 1967, two years before the infection occurred in 1969. Remarkably and prior to her infection, Elizabeth showed no unusual physical characteristics, no disabilities, nor any history of illness. Coincidentally, as if of a matter of fate, Elizabeth was among a group of hippies that accidentally discovered and snuck into an unfinished bunker that would become the research site of the Redlight virus, before the teens were forced out by the bunker's personnel. Since during General Randall's operation in 1969, and at the insistence of Doctor Raymond McMullen, Elizabeth was relocated to Governor's Island for further study until her escape in the present day.

General Randall receives news on Robins' death, which he had executed, and learns about McKlusky and Garcia's presence at Robins' apartment. He orders a search for the detectives and their termination. 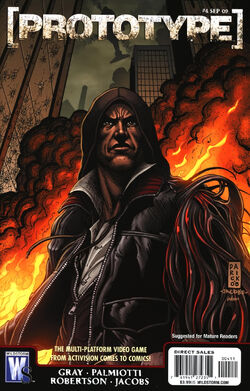 McKlusky and Garcia land on a taxi cab and continue to flee from the Hunter. As they make a run across a street, the Hunter is killed when a speeding firetruck rams into it. After the detectives observe the dead Hunter, they return to their car as Garcia shares her concerns with her partner that everything that is happening is beyond them and voicing to leave the city. Once they reach their car, a military helicopter shines its spotlight on them and are order by the pilots to exit their vehicle and surrender.

Meanwhile, General Randall orders Captain Robert Cross and his men to capture "Zeus" (Alex Mercer) at all cost as he is the only chance of containing the infection without resorting to "extreme measures." Cross understands his commands, and assures Randall that they will capture Mercer no matter "how big the landscape is."

In a flashback, a then Lieutenant Robert Cross participated in Operation Ice Storm in 1998 in which he along with a small group of Blackwach recruits are to investigate an infected underground facility in Antarctica known as Springfield - which houses Russian defectors and prisoners of war, mostly consisting scientists, KGB agents and along with their families. Cross and his men are told that they are to quell a supposed uprising after contact was lost with Springfield until encountering the Infected for the first time; in which Cross becomes the sole survivor of his unit. He manages to rig Springfield to explode and taking the Infected along with it, and escaping to the surface where he is met by Peter Randall, who reveals to him that the entire operation is a kind of initiation, a final test for Cross to enter Blackwatch. 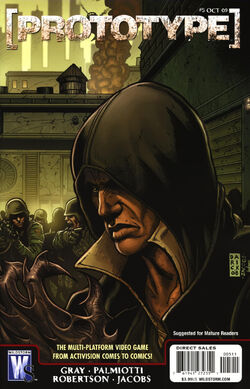 McKlusky and Garcia are demanded by a military helicopter to surrender or be killed. Alex Mercer suddenly intervenes and tells the detectives to leave as he attracts the chopper's attention. Alex lets the chopper chase him and enters into an office building. He quickly runs into a hallway and consumes a janitor. Disguised as the janitor, Alex avoids the Blackwatch soldiers who were sent to find him.

Meanwhile, McKlusky is finally convinced to leave Manhattan. However, he knows only one way to bypass the quarantine is through Grand Central, which is controlled by the military. But fortunately he knows that not every subway station is controlled by them, and hopes that he and Garcia can move underground to Grand Central and that they need disguises. McKlusky then sees three Marines looting a store and runs his car into them. Garcia is shocked at her partner's act, but McKlusky angrily points out that everything is turning into a war zone and they are being hunted by Blackwatch and monsters, that he only wants not only himself but Garcia to escape this alive. This brought a brief moment in which the two passionately kiss.

The detectives then loot the Marines' uniforms but are soon confronted by Blackwatch soldiers. McKlusky quickly guns them down with an assault rifle, providing time for Garcia to escape inside the looted store. The two head into the store's back alley, where McKlusky guns down the remaining soldiers. McKlusky and Garcia then loot the Blackwatch's uniforms. They then enter a vacant subway station. McKlusky confesses his attraction to Garcia, to which she also reveals hers as well. But shortly thereafter, they are discovered by a pack of Hunters. 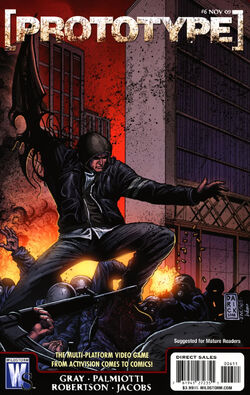 McKlusky lapses into shock from his wound and is urgently brought out of it by Garcia. Weakly, McKlusky tells Garcia that he is infected and that he is changing. He also tells that he is hearing the voice of Elizabeth Greene, who is acting as the leading hive mind of the infected, and learns that she is deeply afraid of Alex Mercer, which he believes Mercer is the one who could stop the infection. McKlusky tells Garcia to leave without him before he turns. He then commits suicide with a gunshot to the head. However, McKlusky's body still mutates into an Infected and forcing Garcia guns down her mutated partner before walking down the tunnel.

Above ground, Manhattan descends under martial law and the island is quarantined from the outside while the news media calls the infection as the "worst viral outbreak in American history." While this is happening, Garcia has succumbed to the Blacklight virus from kissing McKlusky before he had turned. She emerges from the tunnel where Blackwatch soldiers spot her and attempt to gun her down. However, the soldiers are quickly slain by her and the infected Garcia makes her move to apparently outside of Manhattan.