?: "Did you ever consider how the parasite felt? An intelligent cancer ripped from its host?"
Alex Mercer: "Yeah, I did. Once... Right before I killed it."
―? questioning Mercer.[src]

The Parasite was a pathogen developed by synthesizing the viral strands and Alex Mercer's own DNA. It was intended to be a parasitic organism and develop a cure to the Blacklight virus.[1][2]

"The Parasite he's created could be worse than Mercer himself! You can't just...go play god and hope it'll all work out!"
―Mark Katsaounis, a Gentek scientist expressing his concern about the Parasite.[src]

The Parasite was initially created by Gentek with the help of Karen Parker, who had convinced Mercer to gather the required genetic material. Presuming she was developing a cure for the Blacklight virus, Mercer agreed to help in its development, without the knowledge of Karen's true intentions.[3]

After its successful development, Blackwatch used it as a weapon against Mercer. Captain Robert Cross succeeded in injecting the parasite into Mercer after a skirmish inside a hive. The virus manifested within Alex, hindering his shapeshifting abilities and spread through his body like a cancer, feeding on him, causing immense pain. However, the parasite was unable to affect Alex's strength, speed, regenerative abilities, or disguise power.[4]

After being cured from this parasite by "cutting off its food supply" with the help of Dr. Bradley Ragland, (who had the antigens of samples from the parasite extracted and injected into a genetically compatible hunter, where then it developed an immunity to the parasite so that Mercer could consume it and absorb the antibodies to treat himself) Mercer used it as a weapon against Elizabeth Greene. Mercer hoped that this would cure her of the infection or cause similar effects to her body that he had experienced. However, Greene's biology rejected this pathogen and a new form of hunter was created from the biomass.[1] 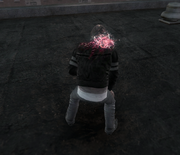 The parasite developing on Mercer's back.

Alex Mercer at Greene's base.

Elizabeth Greene injected with the cure.