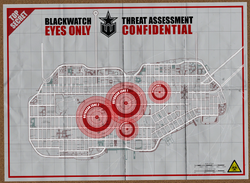 Manhattan Island is one of five boroughs of New York City. It is a relatively safe borough that was ravaged by two viral outbreaks and was on the verge of becoming the second Chernobyl.[1][2]

In 2008, a viral outbreak caused by Alex Mercer and further spread by Elizabeth Greene, ravaged the once relatively safe island. The citizens infected with the virus were mutated into mindless creatures who served Greene's purpose of spreading the virus. The initial outbreak areas were quickly established and the Police and then-present minor military force was unable to stem the spread of the infection.[1]

In order to contain the infection, a military quarantine was placed on the island, martial law was implemented on the island and the NYPD was quickly replaced with Marine forces. While the Marines were the public face, a black ops military unit, Blackwatch, operated within the city in a largely unethical role. However, the city was deteriorating fast while Blackwatch tried to capture Alex Mercer and Elizabeth Greene.[1]

Blackwatch established their base of command (call sign Red Crown) at the island's port, while the Marines operating within the city managed to setup temporary bases using the existing buildings. They also, presumably, set up shelters within large civilian structures, namely the large Football stadium located in the center of Manhattan, although this station was apparently overrun quickly. Despite the large fort-like structures cropping up across Manhattan, however, there were constant battles between the military and infected forces.[1]

After Greene's escape from Gentek, infected Hives were seen across the city. These Hives increased the rate of infection within its vicinity. Eventually, the infected population had increased to cover 80% of the island. Upon Greene's death, the infected population was drastically reduced. Blackwatch decided to nuke Manhattan to completely destroy the virus but Alex saved Manhattan from the blast by taking the nuke away from the island. In the following weeks the city had returned to normality.[1][2]

For over a year, the populace assumed the viral outbreak had been completely cleansed. However, Alex Mercer returned to the city with the intention of ushering a new age, and Manhattan was to be the first city to fall under the new regime. Mercer returned to Penn station, the place where his death had occurred and he had become a host for the Blacklight virus and unleashed the virus once more.[2]

For the next 14 months after the Second Outbreak, Blackwatch was unable to control the infection which led to the zone being quarantined by the destruction of all bridges and attempted sealing of tunnels. With Blackwatch and Gentek experimenting on the citizens of New York, the city was split into three zones, and Manhattan Island was designated as the Red Zone. Blackwatch knew that this was the new home of Alex Mercer and suspected that he was behind the outbreak.[2]

The city was completely devastated, with most of the buildings either partially or entirely demolished and tilted. Large tentacle-like appendages held what was left of most buildings, and fires burned endlessly while the streets were littered with bodies of Blackwatch soldiers and Marines who were sent in as strike squads. The constant struggle between the military and the infected remained constant. A few uninfected civilians still existed, often either finding shelter near Blackwatch bases or hiding in buildings or on rooftops.[2]