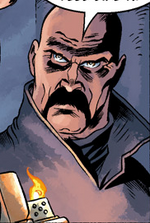 Larry was one of Zurich's henchmen. He accompanied Zurich during their visit to Flint's home.

After Flint declined to sell his lumber yard to Zurich, Larry was sent along with another person to burn down Flint's home. While they prepared to torch the house, Alex Mercer killed both of them and consumed Larry in order to know who had sent them.

Alex Mercer consuming Larry.
Add an image to this gallery

Retrieved from "https://prototype.fandom.com/wiki/Larry?oldid=35141"
Community content is available under CC-BY-SA unless otherwise noted.