"Alex, for what it's worth. I'm sorry it had to play out like this."
―Karen Parker to Alex Mercer at her hideout.[src]

Karen I. Parker was an employee of Gentek and Alex Mercer's ex-girlfriend prior to the viral outbreak on Manhattan Island.[3]

Karen I. Parker was born January 1, 1976.[1] She was hired by Gentek and assigned to a special project for Blackwatch on February 1, 2002. She worked in the genotyping department and reported directly to Dr. Raymond McMullen. While working for Gentek, she achieved a doctorate in genetics from Rutgers University on July 2, 2003.[4]

At Gentek, she came across Alex Mercer, a fellow researcher and head of the Blacklight project. Karen was romantically involved with Alex but somehow their relationship ended before Alex got suspicious about Gentek's workings and decided to expose its true face to the public.[3]

Karen Parker: "Alex, listen, we can work this out."
Alex Mercer: "It's too late for that."
―Karen trying to convince Alex before his escape.[src]

After six years of working at Gentek, Alex Mercer became suspicious of its work. Mercer often confided with Karen about his suspicion. Eventually Mercer became paranoid about Gentek and Karen found out that he had been planning to reveal what he had found out about the company.[3]

While Mercer tried to escape with a vial of the Blacklight virus he had created for Gentek, Karen initially tried to stop him but, upon listening to his reasons, decided to join him. However, when she entered the facility again, Blackwatch arrested her on suspicion before she could escape.[3]

"Karen. Let me help you. We're all in very deep here. There's only one way out: cooperation. If you assist us, you're free and clear. A ticket anywhere you want and a top-level assignment. If you don't... There's nothing I can do for you."
―McMullen trying to convince Karen.[src]

While she was in Blackwatch's custody, McMullen informed her that Mercer had been killed at Penn station as he refused to cooperate. However, Mercer had woken up in the morgue he had been delivered to having been remade by the virus and had escape Gentek custody. Blackwatch suspected he might return to Karen and insisted she cooperate with their plans.[3]

McMullen tried to reason with her, offering top assignments of her choice at any place she wanted. All she had to do was help them to capture Alex Mercer again if he ever contacted her. Since she couldn't think a way out of the situation, Karen agreed to assist them. Blackwatch detained her in her apartment in Manhattan.[5]

Karen: "I thought you were dead!"
Alex: "I should be."
―Karen surprised upon seeing Alex.[src]

Few days later, Alex turned up on her doorstep. As she did not believe Blackwatch, she was genuinely surprised to see him alive. She tried to hug him, however Mercer did not show any compassion towards her. He requested her help in stopping the viral outbreak in the city to which she agreed. Alex escorted her safely from the quarantine zone to another apartment located in East Harlem.[6]

She explained to Alex that there were two strains of virus that had caused the viral outbreak to accelerate. Alex agrees to retrieve samples, which Karen claimed were required to find a cure. Along with her study of the outbreak, Karen discovered that Alex was not what he seemed. She realized that his death had changed him somehow and he had been mutated by the Blacklight virus he had created. [3]

During her time with Mercer, Karen kept her true allegiance a secret while passing the information and the samples Alex had collected to Gentek. The scientist of Gentek managed to create a cancer that could kill Mercer while producing anti-bodies to counter the viral outbreak.

Blackwatch had ordered her to find Alex's weakness, which they could manipulate. Karen used Alex’s memories of her and his fragile emotional state to keep him in check, something which became increasingly difficult to achieve as time went on. Eventually she found out that triggering memories or recollections of events prior to the outbreak caused Mercer intense pain. During these fits, Alex was highly vulnerable.[7]

With the weapon prepared, Karen requested that Alex retrieve samples from a nearby hive. She hypothesized that the viral strands produced within the hives might be the secret to creating a cure. When Alex agreed to do so, Karen apologized for how things had changed.[3]

However Alex was confronted by a Blackwatch Specialist. Captain Cross manipulated Mercer's weakness after a skirmish and injected the cancer Karen and Gentek had created while he was weakened. Mercer managed to escape from Cross, but realized that Karen had betrayed his trust and sent him into a trap.[4]

Before Mercer could confront her, Blackwatch had moved Karen to one of their safehouses in the city. His initial hunt for the truth about the outbreak also revealed to him the truth behind Karen's betrayal.[5] Eventually he found the safehouse she was kept at and decided to confront her and proceeded to kill her in an elevator.[3]

They enter an elevator.

Karen Parker was smart, clever and willing to take risks. She was interested only in saving herself, and understood Alex’s odd predicament fully; she knew, for instance, that "Alex" was dead, and that the virus has replaced him. As such, she was both amazed and repulsed by the creature she was forced to work with. [3][4] 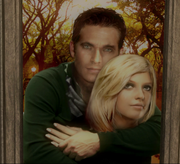 A photo of Karen and Alex.

Karen as Mercer remembered her.

Karen talking to Alex at her apartment.

Karen suggesting to collect more samples for the supposed cure.

Karen being evacuated from a safe house by a Blackwatch soldier.