This article is about Hunters in Prototype. You may be looking for Brawlers from Prototype 2.

"There were Hunters now, thanks to Greene..."
―Alex Mercer.[src]

Hunters are large infected creatures created by Elizabeth Greene. Hunters are stronger, faster, and more agile than other infected. Just a few hunters can take down military armor and large groups of soldiers. Able to climb walls, throw objects, leap great heights, and both give and take a great deal of damage, they make a dangerous foe for Mercer. Mercer manifested his Claws after killing and consuming a hunter.

Hunters were incubated and hatched from infected water towers and hives. Hunters are large, brutal, heavily mutated humanoid beasts with reddish, hairless skin, bulging muscles, sunken eyes and a lipless mouth. They bear a fitting resemblance to a shaved gorilla, and their reflexes are equal to that of a canine.

With strength equal to that of Alex, tough hides resistant to small arms, and speed that belies their size, Hunters are a dangerous foe to both the military and Alex Mercer. A few working in set can tear apart tanks with ease and kill large groups of soldiers. Early on, one alone can be a match for Alex, though later they are only dangerous in packs.

Hunters, as with the rest of the Infected, are instinctively hostile to any creature that is not Infected with the Virus. Hunters are directly controlled by Elizabeth Greene, and as such are able to perform semi-coordinated assaults, and seem to be able to distinguish the largest threat present to them, and then try to nullify it. They will automatically attack Alex Mercer on sight, and make Tanks and APCs their second priority. They are able to destroy Helicopters by throwing pieces of debris at them, or by "pouncing" on them from a nearby rooftop.

Hunters were primarily created by Elizabeth Greene by infecting the soldiers who were guarding her. Alex Mercer first encountered them, when he accidentally freed her from Gentek.[1] After Greene was loose in the city, Hunters were bred within water towers in the vicinity of infected Hives. Most of them were released from a Hive along with human sized infected.

Stronger and faster than regular Hunters by orders of magnitude, a lone Leader Hunter is a serious threat to contend with. They can take far more damage than a regular Hunter, and cause just as much damage to match. They pounce on their foes until they've succeeded in killing the enemy, can throw debris over great distances with surprising accuracy, and can summon regular Hunters to aid them in battle. Leader Hunters have two brains and two spinal columns, both of which must be disabled for Alex to consume them. Consuming a Leader Hunter likewise provides a much larger health boost.

Hunters can do a large amount of damage if they manage to strike Alex, but have a fairly simplistic pattern of attack. When at a distance, Hunters will charge their quarry and tackle it. If they miss on the first attempt, they may suddenly turn and do a second jumping attack. If left to their own devices, Hunters can occasionally be observed grabbing humans and eating them to restore health; however, it is rare that they will attempt this in combat with Alex.

When attacked, Hunters can exhibit two behaviors. If hit hard enough to knock them down, Hunters will flail about for a few moments before regaining their footing, knocking aside anything nearby. If not knocked down after a few hits, Hunters will break into a berserker rage, where in they will slash wildly at everything in front of them. They are invincible in this state. This attack is preceded by a slight pause where the Hunter will draw arm back in preparation for its charge.

The best way to deal with Hunters is through the use of Alex's various powers. The Claws available at the start of the game don't do much damage, but work better than fists and kick attacks. The Hammerfists will stun Hunters momentarily, and can knock them down easily. The Elbow Drop will do this reliably. The Whipfist will also knock down Hunters easily, with the benefit of doing so at range. Musclemass used in conjunction with Alex's higher-end combat moves, particularly the Uppercut and Air Combo, can do large amounts of damage. Similarly, thrown objects will cause significant damage while keeping out of reach of their attacks. Finally, the Air Slash of the Blade can kill Hunters in one or two hits.

Military vehicles and weapons also work. Tanks can kill Hunters in two hits with the main gun, though Hunters will often close in to prevent this. APC missiles will also do damage, though the vehicle is more vulnerable to Hunters than a tank is. Helicopters will render Alex impervious to attack from Hunters, and their weapons can easily kill the Hunters in return. Grenade and rocket launchers work, as well, and the explosions will stun the Hunters.

Avoiding their attacks is key in dealing with Hunters, as they will do a large amount of damage if allowed to connect. Hit-and-run attacks will prevent them from retaliating, and the diveroll can be used to escape their berserker attack before it begins if fighting in close-quarters. Multiple Hunters should be drawn out into the open if possible to keep them from cornering Alex.

When reduced to about an eighth of their total health, Hunters will reel back in pain, allowing Alex to consume them. Doing so will restore a large portion of Alex's health, second only to the Leader Hunters. 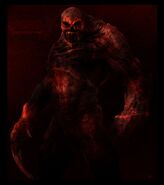 Alex with the early Hunter concepts.

Community content is available under CC-BY-SA unless otherwise noted.