Helicopters are encountered in all stages of the game and come in two forms, the Grey Goose transport variant, and the AH-64D.

Though Alex is unable to pilot or skyjack either form of the helicopter in the beginning portion of the game, he is eventually given the opportunity to consume a helicopter pilot and gains the ability to skyjack and pilot helicopters. The AH-64 is equipped with a guided machine gun, rockets, and homing missiles. The transport variant is modeled after the UH-60A Blackhawk and is armed with the same arsenal, but without the guided machine gun. 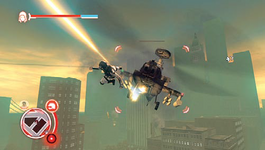 Soldiers will call in strike teams if Alex does not take them out before they complete their transmission. These strike teams invariably include between 1 to 4 helicopters and up to 4 UAVs depending on how much of the game is complete, and as well as the difficulty the player has set. A good way to take out these helicopter groups with UAVs is to focus on the helicopters using your Whipfist and to throwing cars and air conditioners at them. Attack the UAVs after the helicopters have been eliminated.

Alternately, if the player does not have the Whipfist equipped or is in disguise, Alex can be moved in range to skyjack by performing an aerial kick while the helicopter is targeted.

Unlike the tank, Alex cannot skyjack an active helicopter without setting off an alarm.

Another alternative in Prototype 2, James Heller can grab a helicopter and, depending on your progress in the game, can "weaponize" the tow launchers mounted on the doors.