Flyers are vulture sized birds infected with the Blacklight virus. They are said to attack anything that stands or flies in the open. They only appear in the Red Zone.[1]

The Flyers can be any variety of city birds (pigeons, crows, starlings) that have been infected and mutated by the virus. Other than the Hydra, they are the only Blacklight monster that does not have a humanoid physiology.[1]

Their favorite attack method is to perform a high-speed dive-bomb and they are said to mass in flocks.

Flyers have pinkish flesh, scraggly feathers, have batlike wings under their falling feathers on both sides, and gnarled skull-like faces. Their wingspan is approximately two meters and they have enough sufficient bulk to knock a helicopter out of the sky. They resemble the appearance of vultures.

Most of Heller's powers are ineffective against Flyers as they are small but fast; however, using firearms or rocket launchers makes dealing them much easier. Simply lock on, fire a few bullets (or a single rocket) until they fall, then aim for the next target. They are even less threatening to ground targets than Walkers as they are inaccurate.

Their most threatening moment is when fighting with helicopters, as they can kamikaze into helicopters and deal heavy damage. Keep circling and hit them with turrets or rockets until they are all dead.

Some Evolved can summon Flyers to aid them in fight; it will be easier to focus on the Evolved as they will disappear once the Evolved is defeated.

When fighting Alex Mercer, in the third stage he has an attack which summon a large group of Flyers to kamikaze on Heller, who is prompted to use a Devastator against them, this is only useful at this moment as they all attack at the same time. 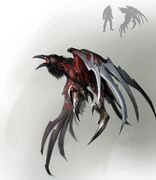