"The time for waiting is over."
―Elizabeth Greene after seeing Alex Mercer[src]

Elizabeth Anne Greene (codename: Mother) was the result of experiments conducted at Hope, Idaho. She was moved to the Gentek facility at New York on Raymond McMullen's request.[2]

Elizabeth Greene was a resident of Hope, Idaho. She moved to the small town along with her father in 1967 after her mother had left to live with a community of hippies. Soon she had familiarized herself with the local group of hippies and befriended a man named Steve. The group broke into an incomplete Blackwatch research bunker and were arrested by the security personnel.[1]

At that time, Blackwatch had started testing the Redlight virus on the residents of Hope without any side-effects. By 1968 the newborn children were dying as the result of Carnival II. The virus however had found a perfect host in Greene. She was able to withstand the virus and produce a new strain (one of 14 discovered) that, among other things, made her body a factory of lethal viruses, and gave her superhuman abilities.[2]

"The mother and child are now military assets."
―Peter Randall[src]

Greene had known associations with six of the twenty seven Hope Children during the project and her infection coincided with the death of the last, Michael K. Allan, on August 6, 1968. Two days later, she became the nexus of the Hope outbreak which resulted in the mutation of the town's residents. The town quickly became a massive hive, with every infected inhabitant single-mindedly protecting the infected Greene. Blackwatch was unable to control the infection for nearly a year. Blackwatch had concluded that Greene was responsible for this outbreak and ordered Captain Peter Randall to capture her. Randall and his team managed to break into the town and locate Greene, who had taken refuge inside the town's hospital.[3]

Randall discovered that she was pregnant and was about to deliver her child. He ordered that the mother and her child were property of Blackwatch and both were to be taken into custody. While Greene delivered her child, Randall watched closely and tried to take the newborn child along with him. Greene bit Randall's arm in a fit of rage. Knowing the risk of infection, Randall severed his arm.[1]

Soon Greene and her child, codename Pariah, were extracted from the town. Blackwatch initiated Operation Altruistic, destroying the small town. This incident was covered up as the result of riots caused by local groups against the military.[2]

"It seems like she's... waiting for something."
―A Blackwatch scientist about Greene.[src]

Due to the infection, Greene's biology had changed. Her aging seems to have stopped and she did not exhibit any degenerative effects common to most human beings. Her body was producing new virus strains on a daily basis, akin to war-dialling at a genetic level, constantly evolving to become "something else".[4] She went into a dormant state akin to brain death. Greene was transferred to Fort Detrick on August 1, 1969 for containment, and held at Fort Detrick, Ward F, for nine years and two months. Pariah was moved to Vandenberg Air Force Base and became a test subject for various Blackwatch projects. They hired Dr. Raymond McMullen, the Director of Gentek, to continue experimentation with gene manipulation.[5]

On October 1, 1978, she was transferred to containment at Governor's Island Medical station, New York. Then she was moved to the Gentek building, located in midtown in Manhattan on January 1, 1989 for study in Project Blacklight, as Test Subject 001 at Dr. Raymond McMullen's request.[6]

McMullen had recruited Alex Mercer, Karen Parker and other promising scientists for the research. For the next ten years, Mercer led Project Blacklight and the team was able to successfully synthesize a new viral strain.[7]

Eventually, Mercer became suspicious of Gentek's affiliations and started to investigate the origin of the viral strands. He discovered Greene's presence in the facility and confronted McMullen, enquiring after Greene's purpose and how the research was being used. Blackwatch considered Mercer a liability, even though McMullen tried to convince them otherwise.[7]

"She wasn't infected naturally. She was a damn test-subject!"
―Alex Mercer to an associate.[src]

As he dug deeper into the Greene's past, Mercer discovered how she was infected and the true nature of his work at Gentek. Mercer escaped with a vial of the virus and released it when cornered at Penn Station. The agents who followed shot Mercer as the vial broke, releasing the virus and infecting civilians in Penn station including Mercer himself. He later woke up in a morgue without any recollection of his past, the virus having reconstructed his body.[2]

In his search for the truth, Mercer infiltrated the Gentek facility in-order to confront Greene, hoping she could answer his questions. However, Greene used this opportunity to escape. She had managed to create a new form of infected beings from the dead soldiers who were sent in to extract her.[8]

"I am your Mother."
―Elizabeth Greene to Mercer.[src]

Upon Mercer's arrival, Greene freed herself from the holding cell and threw him against the far wall. She then showed him visions of her past, providing Mercer with incomplete information. As he tried to recover from these visions, Greene broke a hole in the wall with a touch and escaped while setting the Hunters on Mercer.[8]

Mercer managed to escape the Hunters but soon realized the mistake he had made. Greene had started to infect the city with her own strain of virus at a rapid pace. A few days later, she sent one of her leader hunters to kidnap Alex's sister, Dana Mercer. The hunter was successful in doing so due to Blackwatch's interference in Mercer's pursuit.[2]

With the help of Dr. Bradley Ragland, Mercer located the leader hunter Greene had used. Consuming the hunter revealed Greene's and Dana's location to Alex, who then commandeered a Thermobaric tank to blast his way into the core hive where Greene had been residing and controlling the infected from.

A battle ensued between Greene and Mercer upon the latter's arrival. During this fight Mercer injected the parasite Blackwatch had used to subdue him. However Greene's body instantly developed an immunity towards it and rejected the pathogen. The rejected biomass mutated into a new type of hunter as she escaped the building.[2]

Greene retreated into the depths of the city along with her army of infected as Blackwatch started to spread Bloodtox around the city. This substance initially hindered Mercer's operations, but he develops an immunity towards it over time. An anonymous contact contacted and informed him of Greene's new location and how Mercer might bring her out of hiding.[2]

As suggested by the contact, Mercer infiltrated the Bloodtox supply convoy and managed to pump it under the city. Due to the harmful effect the substance has on infected beings, Greene was driven out of the underground and emerged in the form of a massive infected creature, Mother.

In a battle that wrought havok in the city streets, Mercer tactically eliminated all of Mother's defenses and from that biomass, Greene emerged. Without hesitation, Alex consumed her and in doing so discovered the truth about the incident in Hope.[2]

Elizabeth Greene was a highly unstable individual, although whether this was solely due to the effects of the virus or if it was due to what she had experienced is unknown. She had accepted the infection and was willing to spread the virus, regardless of human loss.[2]

During her time in Blackwatch's custody, Greene wore a medical suit, probably designed for test subjects. Her physical appearance did not change over the span of forty years.[9]

After being infected with the Redlight virus, Greene's body became a breeding ground for new types of viral strains, many harmless,[4], others "the worst viruses ever seen" that could erase human civilisation if they got out.[10] As her blood was always teeming with new variants of the virus, many of these strains were used by Blackwatch and Gentek for research, both in the curing of diseases[5] and in bioweapon research[11], while Greene herself was believed to be key to cracking the viral defences of Redlight and Blacklight.[12]

Elizabeth Greene's most basic and powerful ability was to infect other individuals on a massive scale. The individuals she had infected were somehow connected with each other, and Greene was capable of controlling all of them. This ability of hers was known as the Hive Mind, and was later acquired by Alex Mercer, although Mercer could only manage to use this ability for tracking and reconnaissance.[2]

Greene was also capable of evolving infected beings into Walkers and Hunters. Her first known creations were the Walkers, former citizens of Hope, Idaho whom she had infected. Greene used these Walkers to protect herself from Blackwatch in 1969. During her time in the Gentek facility in Manhattan, Greene managed to create more powerful evolved forms of infected like Hunters and Leader Hunters.[2]

During her final conflict with Alex, Greene surrounded herself with vast amounts of biomass, forming a large worm-like creature with three large tentacles protecting its core. This form adopted by Greene, dubbed "Mother," had potent defensive abilities and claimed many lives during the battle. Eventually, Alex weakened the mutated form and Greene was forced out of its bulbous core.[2]

Another concept art of Greene, this time in a withered white dress and alongside an earlier version of Hunters.

Elizabeth Greene's early artistic concept, having much longer hair and in a white dress. 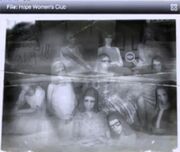 Greene alongside other women of Hope, Idaho.

Greene with an army of Infected.