Col. Douglas Rooks (callsign "Checkmate") is the secondary antagonist turned anti-hero of Prototype 2 and an elite Blackwatch officer responsible for the operations of Blackwatch in NYZ in Prototype 2. Due to his unwavering loyalty and commitment to Blackwatch's sworn oath to combat biological threats, Rooks was assigned to protect NYZ's three quarantine zones and to facilitate various Blackwatch and Gentek initiatives.

During his time in NYZ, Rooks oversaw various projects that attempted to weaponize the viral monsters created by Alex Mercer to terrorize the human populace.

With the death of Lieutenant General Randall at the hands of Alex Mercer on board the USS Ronald Reagan, Rooks assumed command of all Blackwatch operations within NYZ. Rooks was of the truly loyal faction of soldiers who believed that Blackwatch was the last line of defense for America against biological warfare. Oftentimes, Rooks has his aide-de-camp, Lieutenant Riley, oversee various field operations.

When James Heller broke out of Gentek's containment facility, Rooks prioritizes the capture/death of Heller as Blackwatch's secondary objective to halting the second outbreak. At one point, Heller, disguised as a Blackwatch soldier, attempted to assassinate Rooks, only for the colonel to mysteriously vanish in his sights once the former got distracted.

Heller made a second attempt on Rooks' life when the latter was on his cellphone conversing with his wife. Just as Heller was about to strike Rooks, the Colonel's mentioning of his daughter over the phone call stopped the former Sergeant short. Heller quickly changed into Lieutenant Riley's form, subtly touched at the fact that behind the ruthless face of a Blackwatch officer, Rooks was a family man at heart.

Not realizing that Riley was dead and that Heller had been assuming the Lieutenant's identity the whole time, Rooks accidentally slipped to Heller that the latter's daughter, Amaya, was still alive. Ultimately, however, Rooks deduced that "Riley" had gone rogue, and ambushed him, only to be surprised when Heller revealed himself. Being held at a gunpoint, Heller politely informed Rooks that all he cared about was Amaya's safety. The stunned Rooks did not shoot Heller (useless as it would have been), and allowed him to go his way.

Later on, Rooks contacted Heller via Blacknet, exclaiming that he had Amaya captive within Gentek headquarters.

"Take your damn daughter, and get out of this fucking city."
―Rooks after realizing Heller's true intention.[src]

Despite orders by the head of Blackwatch to evacuate the headquarters, Rooks was cornered by Heller, accompanied by two Blackwatch troopers. When Heller again stated that all he wanted was Amaya, Rooks surprises Heller by killing his troops with his pistol. Setting down his firearm, the colonel then asks Heller to leave the city with his daughter, pointing at where Amaya was held. With that, Rooks left the Gentek headquarters.

Rooks is an enthusiastic, tough and quick-minded person when compared to the former General Randall. He is occasionally thrilled about the positive developments in his operations and gravely enraged about the negative ones.

Even with his long-standing commitment to Blackwatch, Rooks was compassionate about his family. This differentiates him from the rest of the Blackwatch operatives, who are cold and calculating. Despite his moment of kindness however, Rooks was still shown to be ruthless, at one point reminding Blackwatch personnel that mass civilian casualties are acceptable should the infection be purged, although it was more pure pragmatism on his part rather than sadism as displayed by many of his subordinates. Rooks was also quite furious when "Riley" supposedly became a traitor, and was shocked when his trusted soldier and friend was revealed to be dead and merely another disguise for Heller. In spite of this, however, Rooks still proved to be far more caring than the majority of his troops, going as far to shoot two of his own men to allow Heller to get his daughter back.

There is however several Blackbox recordings that show Rooks indifference towards the residents of Manhattan such as in one recording Colonel Rooks was heard threatening to discipline a soldier over saving a woman from being raped, regarding his actions as merely the equivalent of saving a cow or lab rat as well as a recording of Colonel Rooks explicitly stating that it wasn't Blackwatch's responsibility to police the refugees, even when they started killing each other. 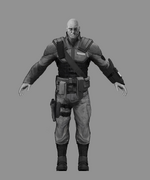 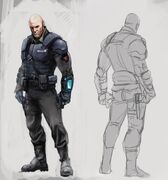