"Mankind is your mask; use disguise to conceal yourself as a perfect copy of the last individual you consumed."
―Description.[src] 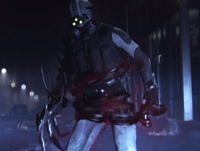 Transformations can only be achieved with human targets; non-human targets like the Infected or the Hunter class targets only provide additional health. In order to gain complete advantage of this ability, Mercer and Heller have to stay hidden from the military while transforming.

The primary purpose of this ability is to hide from the military or infiltrate their ranks. If disguised as a military personnel, Alex Mercer was able to call in Artillery strikes on assigned targets. While in disguise, activating any offensive powers (Blade, Claws, etc.) will negate the disguise, reverting the Prototypes to their default form, although Devastators can be used without shifting back.

This ability is completely useless against the Infected as their sight allows them to see individuals infected with the Blacklight or Redlight virus. Viral Detectors can detect traces of the virus in the air and alert the military personnel in the vicinity.

The disguise consists of a disguise meter with a shutter at the bottom. When the shutter is open, Mercer is being watched by the military. When it's closed, he's unseen. Every action that might compromise Mercer's identity would fill the meter. When the meter was completely filled and marked red, it indicated that Mercer's identity had been compromised. Staying hidden or out of enemies' sight would decrease the alert level.

The disguise ability remains mostly the same for James Heller; however, he is unable to call in artillery strikes or call patsy on military personnel. The meter remains, and fills up if Heller commits superhuman feats in full view of military or Blackwatch soldiers, or remains in the radius of Viral Detectors for too long. With the acquisition of the Biobomb, Heller can infect human targets while retaining his disguise. 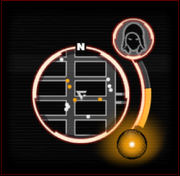 Half filled meter with suspicious enemies around. 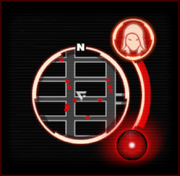 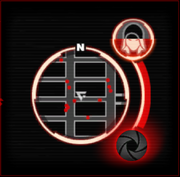 The disguise meter during hidden status.