"Dana. Hopefully she'll be able to tell me something, anything."
―Alex Mercer after reminded about Dana.[src]

Dana A. Mercer is the deuteragonist of Prototype and a major character in Prototype 2. She was the younger sister of Alex Mercer. She was an investigative journalist and Alex considered her the only person he could really trust.

During the second outbreak, Dana became the leader of the resistance in the Yellow Zone and operated under the alias Athena. However, after seeing what Alex has become, she helped James Heller against him as she realized that the man that was her brother was already dead.

Dana Mercer was born nine years after her brother. They never knew their father and due to their mother’s drinking problems, Alex was the only parental figure Dana ever knew. Dana fled to New York five years after Alex moved there to work, hoping to reconnect with him.[1]

At the age of 20, she followed her brother to New York City five years after Alex moved there to work for Gentek. However she was unable to contact Alex. Alongside her studies, Dana also wrote for a few local tabloids for a living.[1]

A few months later, she was contacted by Alex, who urged her to investigate the activities of Gentek. In hope of helping her brother, Dana started to search for any information about Raymond McMullen, the founder of Gentek and all of his associates.[2]

Days later, she was arrested by Blackwatch due to her relation to Alex. Alex had fled Gentek with a sample of the virus and released it at Penn station. After escaping a morgue, Alex learned about Dana by consuming one of the Blackwatch soldiers and hurried to her apartment. Upon entering the apartment, Alex found his sister being held captive by a soldier. The siblings fled the apartment after he killed the soldier with his bare hands. Dana later revealed to Alex what he had asked her to investigate. When she realized Alex didn't remember his past, she helped him discover what had happened to him.[2]

"Whatever happens, you're still my brother."
―Dana's reply to Alex's apology.[src]

With the help of the laptop Alex had sent her before he went missing, Dana was able to help Alex get to Dr. McMullen, the Director of Gentek. She discovered that Gentek worked on creating and manipulating viral strands. She also discovered the identity of a test subject being held in the Gentek building, an apparently young girl named Elizabeth Greene whom Alex later released in his search for answers. Greene was revealed to be a Blacklight being that later intensified and directed the spread of the virus in the city.[2]

In order to find further information about the outbreak, she suggested Alex contact his ex-girlfriend, Karen Parker, who was also an employee of Gentek. After a few days she tracked down a pathologist named Bradley Ragland, a former employee of Gentek who had resigned for unknown reasons.

With her help, Alex was able to find out who he was before the outbreak. Dana was disgusted and disturbed when Alex admitted his murderous acts and what her brother had become. However, Alex apologized, pleading that such murders were necessary to regain his life. As he was the only person she ever cared for, Dana forgave him.[2]

"She's with us now."
―Elizabeth Greene to Alex when he asks her about Dana.[src]

Their reconciliation was cut short when a Leader Hunter, broke through the wall of the apartment and took her hostage. Alex tried to rescue her but the rescue was foiled by the military's interference. The Hunter managed to escape with Dana. Alex then contacted Dr. Ragland for help, who suggested that in order to find his sister, he must consume a Leader Hunter and tap into the Hive mind. Prepared to rescue his sister at all costs, Alex tracked down and consumed a Leader Hunter to access the hive mind. He discovered that Greene had ordered the kidnapping, the reason for this however was not known.[2]

With Blackwatch's unwitting help, Alex entered the building where she was kept. He was confronted by Elizabeth Greene, into whom Alex injected the cancer he was previously infected with in the hopes of ending her. Her body rejected the parasite instantly and the rejected biomass manifested as a new form of Hunter. Alex barely managed to defeat the hunter, and took Dana to Ragland. Checking her vitals, he tells Alex that she is stable but unresponsive, most likely in a comatose state. Alex left her in his care and resumed his hunt.[2]

Eventually, Dana recovered from her catatonic state. During the second outbreak in New York City, Dana had moved to the Yellow Zone and was working with the resistance under the codename: "Athena". During her time as the leader of the resistance, Dana helped Conrad Stevens and his group to safety while they took refuge in the Yellow Zone. When Father Luis Guerra started to assist James Heller, Dana passed them vital intel that helped Heller destroy Gentek and Blackwatch's operations in the Yellow and Green Zones.[3]

After Guerra's death, Dana contacted Heller to inform him that his daughter Amaya was still alive and being held by Gentek in the Red Zone. Eventually, Blackwatch started to search for her, but she was found by Heller. Since Heller did not have anyone else to help him, he trusted Dana with his daughter after she was rescued.[3]

When Amaya was kidnapped by Alex Mercer, Dana contacted Heller and told him to do what he had to do, acknowledging that the Alex she knew was no more. When Alex realized what she had done, he imprisoned both Amaya and Dana inside a bank vault. However, they were released by Heller after he had killed Alex Mercer.[3]

Dana was attending Journalism School at NYU. Her nosiness and naturally bulletproof ego led her to a life of investigative journalism. She was disrespectful, foul-mouthed, and not afraid of a fight. All the same, she displays deep affection for her brother, the only parental figure she ever had.[1]

Dana has short, brown, spiked hair, while her eyes are silver blue. She wears a grey hoodie with a grey and black striped shirt underneath. She also wears a short denim skirt with a pair of black tights and a pair of red sneakers.[2] 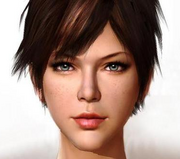