Lt. Clint Riley (call sign "Castle") was Colonel Douglas Rooks' personal aide and trusted confidant in the NYZ operation. He had served in Blackwatch since at least the events of the first outbreak.[1]

Riley engaged in many operations, including providing protection for Gentek scientists, facilitating all NYZ military operations, and engaging in various operations to capture James Heller. All of his operations were taken on the behest of Colonel Rooks' orders.

Riley's life before joining Blackwatch and serving under Rooks is largely unknown, although the Colonel stated at one point, the younger man was raised in the Midwest.

At some point after the Second Outbreak, Riley confronted Conrad Stevens, the leader of three Red Zone refugees. Stevens attempted to justify his killing of Blackwatch troopers, saying he knew the soldiers would kill him and his two charges, Marcie and Ami Levin. Riley made a deal with Stevens, saying he would be able to see his wife, Madeline, in exchange for Stevens' cooperation. Madeline, however, was in fact dead, but Riley kept this information to himself. Stevens, Marcie and Levin were instead made test subjects for Project ORION, a Gentek super soldier program.

Riley later assisted Rooks following the retrieval of Sergeant James Heller, a Marine infected by Alex Mercer himself. After Dr. Koenig's tests revealed Heller had similar abilities comparable to those of Mercer, Colonel Rooks ordered him burned. Riley complied without hesitation, even showing sadistic glee at the opportunity to incinerate Heller. Despite this, however, Heller survived Blackwatch's attempts to kill him, and was even able to escape. Riley would then open fire on Heller, although he was once again unsuccessful at killing him. For the most part, Riley was seen in cutscenes, often assisting Colonel Rooks, who seems to trust the lieutenant enough to share confidential information regarding Blackwatch operations despite the "need-to-know only" protocols.

When Riley personally led an operation to seek out Heller, the latter ambushed the Lieutenant's convoy personal tank. Defiant to the end, Riley exclaimed that Rooks would kill Heller, only for the former Sergeant to reveal that he would simply assume the Lieutenant's identity as he killed and consumed the soldier.

Riley was quick to discipline any soldier that a displayed less-than-professional behavior or attitude. Conversely, his relationship with Rooks was extremely sycophantic; Riley jumped to do anything the Colonel asked, and scrambled and showed shame when the Colonel brought him up short.[1]He was extremely rude and condescending to his subordinates, not hesitating to bark profanities at soldiers ranked below him. This two-faced attitude reflected that of a loyal dog; he was eager to please the Colonel, all the while maintaining a dismissive persona towards others. He was also quite sadistic, laughing while attempting to burn Heller alive and saying, "I'm gonna turn your (Heller's) ass into charcoal." He also held contempt for Dr. Koenig, disregarding the virologists concerns and complained to Rooks, disliking Koenig's "sickening" apparent sympathies for Heller. In spite of those qualities Riley may have had some morals, possibly the result of his conservative upbringing, as he seemed to be surprised and quite possibly even disgusted at the existence of a brothel established to serve the Blackwatch troopers. Additionally he did not beg for mercy prior to his death, merely telling Heller Rooks would kill him. 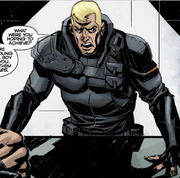 Riley as he appeared in the comics.