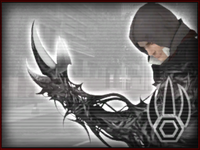 The Claws are an offensive ability developed by Alex Mercer and James Heller. Mercer was able to unlock this ability after consuming a Hunter. Similarly, Heller gained his Claws by consuming a Brawler. [1]

When activated, the biomass of the arms shifts the hands into three-fingered, one-thumbed knife-like talons that can used to shred flesh and bone, allowing dismemberment of human-sized enemies with ease; however, it is less effective against armor and larger Blacklight creatures.[1]

Dashing slice is a movement upgrade to the Claws. It is the most powerful slashing-type of attack available from the Claws. Since it is performed while sprinting, charging the attack automatically slides the Prototypes towards the target before delivering the slash. This helps in rapidly closing the distance to the target and can automatically stop to perform a Groundspike attack easier.[1]

"Shift your mass into a deadly spike that erupts beneath your enemies. Combine with targeting for pinpoint spike precision."
―Description.[src]

Groundspike is an upgrade and an extension to the Claws. It is highly effective for short or longer-ranged area attack. The biomass from the Claws are channeled into the ground to erupt and impale a targeted enemy or a tight group of enemies. This power can be upgraded to cause maximum damage and area effect. This ability is useful for destroying infected water towers with one strike.[1]

The Claws are best put to use as an anti-personnel weapon; their speed allows to shred through large groups of infected and humans in seconds. When upgraded with the Groundspike ability, damage can be caused to distant enemies by clawing the ground and causing massive spikes of Biomass to erupt beneath the target, impaling everything within its proximity. This ability is particularly useful to deal with armored vehicles, and even some larger infected enemies.[1]

Although the Claws have their advantages, basic attacks are ineffective against armor, D-Code soldiers, and larger infected. In close combat, the damage dealt against them is very low when compared to the Groundspike attack. The Groundspike ability forces Alex Mercer to remain stationary for the duration of the attack. This results in a moment of vulnerability allowing enemies to attack him.[1]

Heller's Claws are mutated beyond Mercer's in that they are usable for aerial combat. Heller is capable of attacking an airborne vehicle, causing reasonable damage. His Claw Pounce maneuver improves on Mercer's Dashing Slice by being able to attack at any degree of elevation while grounded or airborne. Heller also can further mutate his Claws, increasing the rate of damage dealt.[2]

Claw Pounce is a charged attack, in which Heller will start by extending his Claws like he is about to pounce like a real Jungle Cat, next he will enhance his leap with his biological cells similar to his glide power and slash at the target.

Mercer with his claws.

A Concept Art of Mercer's Claws.

A soldier being held by Mercer. 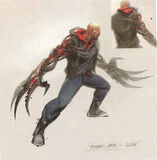