"A powerful and deadly cutting and thrusting weapon, perfect for slicing and swiping through even the toughest armored vehicles or infected hides. This attack power allows access to the most powerful strikes available."
―Description[src]

The Blade is an offensive power employed by Alex Mercer and James Heller. Mercer gained this ability along with the armor power, once the parasite was removed from his body,[1] whereas Heller gained it by defeating and consuming an Evolved, Keith Gallagher.

When either Mercer or Heller activate this ability, an elongated double-ended blade forms from the base of the right elbow, turning their arm into a giant razor-sharp cutting weapon.

The Blade is extremely effective in close contact, and although the area of effect is very localized, the Blade's basic attacks dish out higher damage than those from any of the other powers. While this power may be utilized against basic infantry units, its true destructive capability is in attacking vehicles and large infected creatures such as hunters or brawlers.[1]

Alex Mercer can perform many moves by upgrading this ability, whereas James Heller has to gain mutations for upgrades. As he mutates his ability, the attacks, damage dealt and the appearance of his blade change with each level.[1][2]

The following are upgrades for the Blade power available to Mercer:

"Slice and dice from the air. Cleave your enemy in half with this drop-down cutting attack."
―Description[src]

An aerial drop attack, Alex falls with a bit of a spin to enhance the slicing capabilities of the Blade. This ability can destroy any non-boss (or building) unit in at most two direct hits. It is the most powerful single strike available from the Blade. 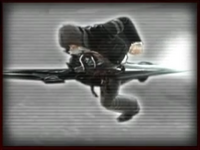 "Unleash a series of slashing attacks from a standing start."
―Description[src]

Mercer lashes forward, unleashing a series of slashing attacks from a standing position, slicing while running for a few steps. Can be manually interrupted by a Diveroll.

"Slice your foes with a lunging blade sweep out of sprint."
―Description[src]

An upgraded alternative to Blade Frenzy which allows Mercer to perform the same attack as Blade Frenzy but while sprinting. The slashes from Blade Sprint Frenzy deal slightly higher damage than slashes from a Blade Frenzy. It can cut through crowds of human-class enemies at a very high speed, but it cannot be interrupted manually.

The Blade is a close combat power and is capable of dealing large amounts of damage to heavy targets. Although it doesn't quite match the Claws in terms of raw speed, the Blade's attacks are still fairly quick and they deal more damage than any other power. Even the Hammerfists cannot match the Blade's damage potential against a single target.[1]

A completely charged Air Slice attack causes very heavy damage and is an efficient means of dealing with toughened enemies. However the attack can be difficult to execute effectively. The Air Slice involves dropping on top of an intended target, therefore its tracking capability is highly dependent on the starting altitude when executing the attack. This makes it difficult to perform against helicopters, since they can often out maneuver Mercer and Heller with their speed and ability to ascend. From the time the attack is initiated to the landing on the target, Mercer can be shot down by enemy fire. Another downside to the Air Slice is that upon landing, Mercer will pause a short while to recover, which is often enough delay for quicker enemies to counterattack.[1][2]

Blade Frenzy moves allow for a quick series of strikes to rapidly finish off a large foe, or simply dash through enemies, dealing massive damage to anything the Blade touches while evading the short but deadly reaches of certain opponents.

The main drawback with the Blade, especially in Prototype, is that it is tailored more towards dealing damage unto single opponents, as opposed to the AOE capacity of the Hammerfists, or the light, quick slices of the Claws.

James Heller gains an improved Blade in Prototype 2 compared to Alex Mercer in Prototype. The Blade Frenzy moves have been streamlined into a collective ability known as the Blade Tornado, in which Heller spins with his Blade arm fully extended, creating a radius of cutting that slices anything in the way of his path as he rotates towards a given direction. Heller can also leap towards a target while in mid-air, cutting anything in his trajectory with the Blade. Note that doing a Blade Air Slice, as well as a Blade Tornado will automatically take away one arm from a healthy Brawler without any stunning or trapping with Tendrils. The Blade Air Slice's damage against Armors is also weakened and is overall less effective than Hammerfists' groundspike divebomb attack against tightly packed enemies.

A Concept Art of Mercer's Blade in Prototype 2.

Alex slices through a soldier.

Alex uses his blade against the Supreme Hunter.

James Heller with his blade arm.

Heller with a level 1 blade.

Alex with his Blade wielded as seen in the comics.

Triple Stab with the dagger end of the Blade.