Blackwatch soldiers, also known as Spectres, are Blackwatch's chief and private resource of elite foot soldiers.[1] Each soldier is chosen not only for their combat and training prowess but also for their innate belief that individuals must be sacrificed to protect the greater population.[2]

"With a lucrative pay scale and a brutal disciplinary system [...] you get a pack of extremely loyal, fiercely idealistic and extremely ruthless killers."
―Radical Entertainment describing the soldiers[src]

The rank-and-file members of Blackwatch are well trained soldiers and incorporated with biohazard gear with standard military webbing. Standard troopers wear mostly black combat gear such as boots, protective vest, and fingerless gloves, with a military olive-drab colored full body "skin" that resembles a durable wetsuit, worn under their other equipment as the first layer of protection. Their outfits incorporate biohazard gear with military equipment. On their head, Blackwatch troops wear vision enhancing goggles with dark blue lenses, helmet and a modified gas mask to protect themselves from the contagion that they have been mandated to fight. [3] Blackwatch Commanders wear the same gear as normal troops, but colored differently to reflect their higher rank: their under-armor "skin" is white instead of dark olive, and the lenses of their goggles are bright yellow instead of the normal blue.

In Prototype 2, the Blackwatch infantrymen have received considerable visual updates. Their uniforms, while still form-fitting, now include pauldrons and hoods that give them a ninja-like appearance. Knife-like equipment is attached to their forearms, perhaps serving as close-combat weapons against the Infected. The infantrymen still mask themselves in fully-covered gas masks, now concealed within the hoods. They also look much bulkier, albeit still very small compared to the Super Soldiers.

Blackwatch soldiers are tougher than Marines but are still weak opponents on their own - a single punch from the Prototypes or the Walkers can result in instant death. They normally have no trouble dealing with the weaker Infected as they are capable of killing them from a distance with their weapons.[3]

Unless they have and use heavy weapons and if they are in substantial numbers, they will have difficulty defeating Walkers and Hunters. Blackwatch troops usually appear in squads and pack several different weapons and in later stages, a squad - particularly one with a missile or grenade launcher-toting member or two - is large enough to put a dent in Alex's health.[3]

Generally, they will use their firearms; however, if an enemy gets too close, they'll attempt to hit them with their rifle's butt.

A squad in Times Square

A Concept art of the new Blackwatch Soldiers from Prototype 2.

A concept of a Blackwatch Pilot's helmet. 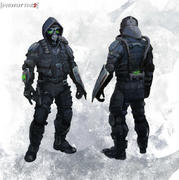 An early version of a Blackwatch Soldier. 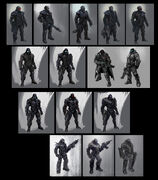 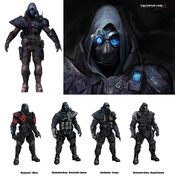