The Armor is the second defensive power of Alex Mercer. While in this form, he takes less damage, but the added density results in loss of movement speed and overall agility.

The Armor and Blade powers are unlocked after a few missions with Dr. Bradley Ragland, who helped Alex remove a debilitating parasitic organism in Alex's back. Doing so allowed Alex to gain said powers.

The Armor provides an alternative to the Shield. Unlike the Shield, which completely negates minor frontal damage at the cost of having a temporarily finite ability to absorb punishment, the Armor significantly reduces all-round damage taken by Alex without losing effectiveness.

Even though it cannot deflect stray bullets like the shield, it is still ideal for close combat, allowing Alex to go toe to toe with the strongest foes without quickly succumbing to large amounts of damage. Conversely, running from a fight is somewhat more difficult, and Alex's ability to dodge attacks is hampered.

Armor disables the ability to Glide and diveroll. When sprinting, parkour stunts over many objects are disabled; though they can still climb buildings, while sprinting, they will smash through anything in their path, be it cars, humans (Infected or otherwise), or other small destructible obstacles.

Larger objects, like tanks and heavier barriers, will block his path. In addition, Alex will crush any human enemy he jumps on while the Armor is active, as if they were hit by Musclemass. It is automatically unlocked, along with the Blade, once the parasite is cured.

The Armor is a very effective defensive ability against fighting more powerful enemies because of the large amount of biomass that fully surrounds Alex's body and never breaking. Though it does not completely absorb damage like the shield does, instead, it simply reduces it to a fraction of the damage that Alex would normally experience without it. While the armor is in use, Alex can almost effortlessly clear a path and power through most enemies and vehicles whenever and wherever he is sprinting. Unfortunately, Alex also cannot glide, diveroll, or perform any parkour maneuvers while the armor is active. However, he can still use his airdash and air recovery moves like he would normally.

The Armor's main drawback is its decrease in overall mobility. Mercer's natural movement speed and jump height are both greatly reduced while it is active, making it more difficult to escape enemies than when it is not. The armor even takes away Mercer's Glide and Diveroll abilities, which makes dodging military rockets and parkouring over buildings harder than normal.

Concept art for the Armor. 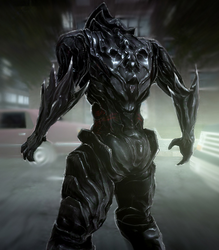 The rear-view of the Armor. 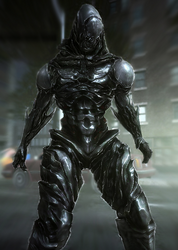 The front view of the Armor. 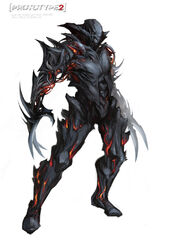 Mercer's Armor as it looks in Prototype 2. 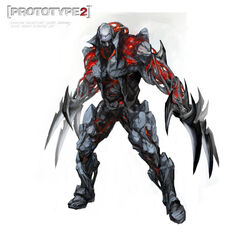 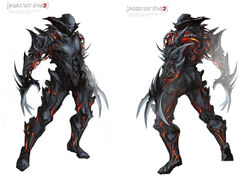 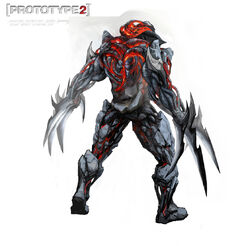