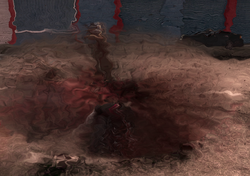 Area Effect attacks are collective strikes that allow the Prototypes to hit multiple targets surrounding them. Most, but not all devastator attacks are considered as area effective attacks.[1]

The area effect attacks can be classified into ground level and airborne. The difference between the two attack types is the chance of hitting the target and the time taken to charge. At ground level, the attacks can be interrupted by attacking enemies while being charged. This results in damage and knock backs to the Prototypes.[1]

Groundshatter is a ground level area effect used to clear the surrounding area off weaker enemies by creating a medium ranged shockwave. Upon pounding the ground with the arms, the shock-wave created launches weaker enemies into air or killing human sized enemies. This attack is useful for clearing the infected attacking at close range. This attack causes the hunters and D-Code soldiers to stop mid attack and back off.[1]

An airborne version of the Groundshatter attack which has the same effects as the ground attacks.

One of the most deadly and powerful move, the Groundspike Graveyard Devastator produces a cascade of deadly groundspikes. This attack impales enemies within a certain range with gigantic tendril shaped biomass, killing human sized enemies and dealing high damage to larger enemies. This devastator is an upgraded version of the Groundshatter which utilizes the critical mass.[1]

The Knuckle shockwave is another ability that can used to clear the surroundings of troublesome enemies. It creates the same shockwave as the Groundshatter, but has less recovery time and is quicker to launch.[1]

Not the most damaging attack, but great for clearing the air with a powerful shockwave blast. Use during jumps to clear away weak or damaged aerial opponents.

The Tendril Barrage Devastator is the ultimate area effect attack. This devastator is useful for killing swarms of enemies, both ground and airborne enemies. This attack can be used to maul a pride of hunters as they charge in. This results in their deaths or interrupts their attacks. The Tendril Barrage is the most potent devastator, due to its ability to strike ground and air targets.[1]

An impressive and versatile airborne attack, the Air Tendril Barrage Devastator can be used to clear the air off sky borne enemies such as helicopters and UAVs.

A unique ability developed by James Heller, which allows him to unleash waves of tendril shaped biomass from his arms. These tendrils are powerful enough to rip apart hunters and other troublesome foes. The Black Hole move in particular, is capable of pulling multiple enemies into an epicenter and ripping them apart.[2]

Hunters and Leader Hunters are capable of Groundshatter. The shockwave creates a knock-back effect which prevents the Prototypes from charging. The Supreme Hunter can perform both Groundspike Graveyard Devastator and Tendril Barrage Devastator.[1]